NOTE - This scenario assumes the High Point and Rome/Alabama, Georgia Coast, and Western railroads were never formed and that the CSX Birmingham to Atlanta main was pulled up in the late 1980s, as it was in real life.

The West Georgia and Alabama railroad was formed in 1977 to operate the Southern Railway branch line between Atlanta Junction (near Rome, GA) and Piedmont, AL, which was up for abandonment. Initially, the bulk of the traffic was within the City of Piedmont itself, with occasional runs made to the team track at Cave Spring and Alcan Extrusions near Atlanta Junction. There was little other reason to run as far as Rome, as all interchange traffic was handled with the Southern and the Seaboard Coast Line at Piedmont. Initially, the power was a single ex-EL Alco C425, which was painted and numbered as WGAA 1340, a nod to local radio station WGAA 1340 AM, based out of Cedartown, GA.

While runs to Rome were a rare occurrence in the early years of the WGAA, this would change in the late 1980s. NS filed to abandon the remaining section of the Rome to Anniston branch, and WGAA purchased the section from Piedmont to Jacksonville. With no traffic south of Jacksonville, the remainder of the NS line was pulled up. At this time, the bulk of the interchange was moved to Atlanta Junction. Additionally, in 1988, CSX applied to abandon significant portions of their mainline between Birmingham and Atlanta. Track was removed between Wellington and Piedmont, AL, and Rockmart and Atlanta, GA. WGAA applied to lease the section of the CSX mainline between Piedmont and Rockmart. Interchange with the CSX at Rockmart was minimal, and the only online customer between Piedmont and Rockmart was GEO Chemicals in Cedartown, which generated minimal traffic. The line between Piedmont and Rockmart was returned to CSX in 1995 and the line from Cedartown to Piedmont was later abandoned.

In the modern era, WGAA operates 48 miles of track between Atlanta Junction and Jacksonville, serving 5 customers and a team track. Two more locomotives have been acquired, a GP38 acquired from NS in 2003 and a C39-8 acquired from NS in 2009. The original C425 is still operational but is primarily stored in Piedmont, and generally only activated in the fall when traffic at the Calhoun Co-op picks up. Throughout most of the year, a southbound leaves Rome on Tuesdays to run to Jacksonville and a northbound returns to Rome on Thursdays or Fridays. During the fall, trains are more frequent, hauling a number of covered hoppers to the Calhoun Co-op at Piedmont. The railroad is headquartered in the old depot at Piedmont. Train speeds are slow - 10 MPH over the entire line, due to poor track conditions.

I drew up a model railroad plan in AutoCAD for this line. It's for a 14'x12' room based off the sunroom in my house, although I don't foresee my fiance giving me a second model railroad room when I've already got the room over the garage for my BC Rail Dawson Creek line.

The plan and operations are heavily influenced by Tom Johnson's Logansport and Indiana Northern, with short trains and run down equipment and trackage. The equipment could effectively be modeled with an Atlas C425 and GP38 and a Scale Trains C39-8, with the C425 wearing some sort of custom paint scheme but the GP38 and the C39-8 simply being patched from NS. I used the dimensions of Peco #6 turnouts and think the rest of the track should be either Micro Engineering Code 70 or maybe handlaid Code 55 to represent extremely light rail. 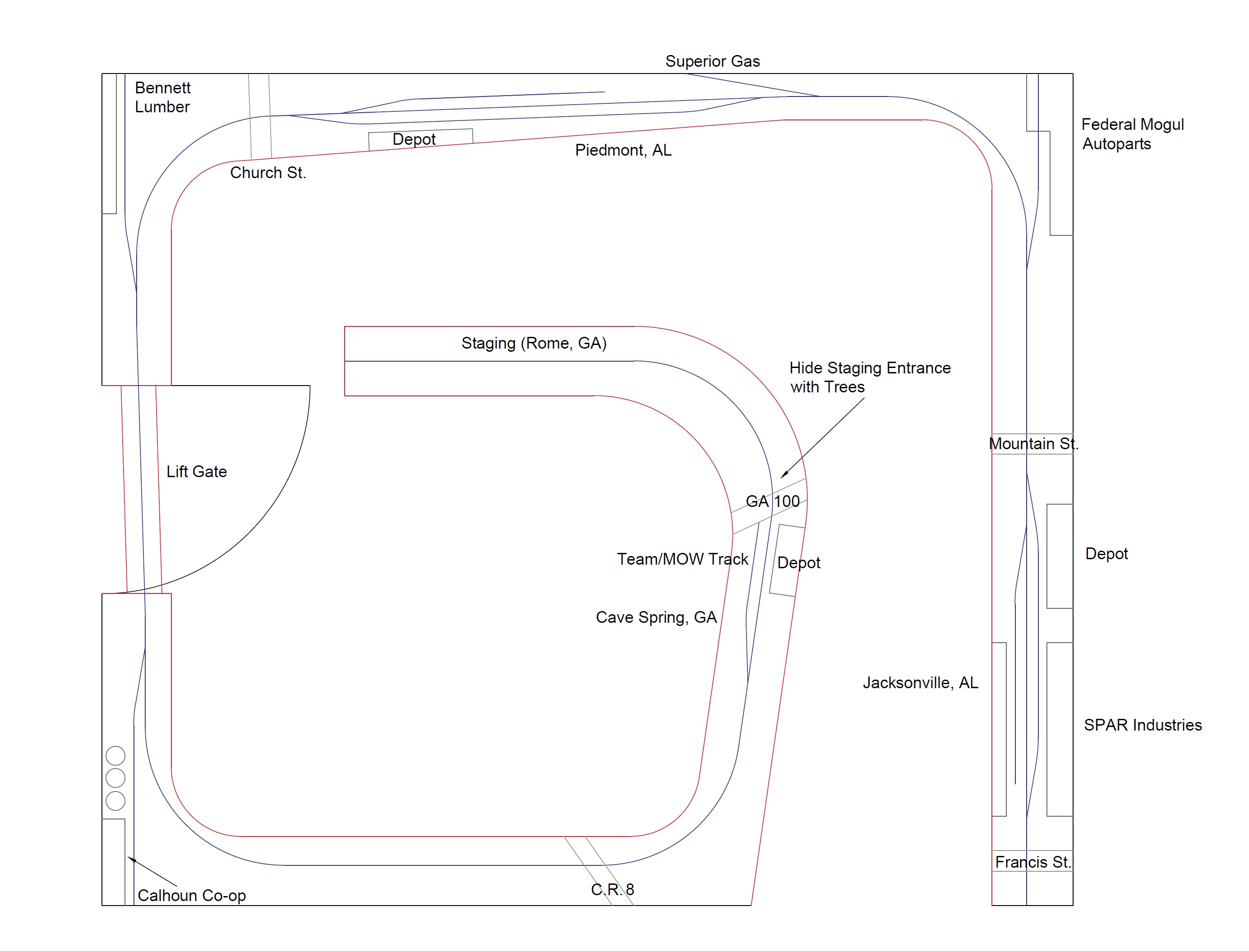 Re: West Georgia and Alabama Railroad